When you are taking on an invasive species of termites like the Formosan termites, an insect that in its native region is called a “house” termite due to the devastating nature of its destruction, it is best to fight nature with more than just the human eye.  At Palmetto Exterminators we have implemented two key technological devices that when paired with extensive training and thorough inspections helps us identify and inspect for Formosan Termites.

A homeowner who did not have a termite warranty called the Charleston office because they noticed some slight imperfections in the trim work around their window. 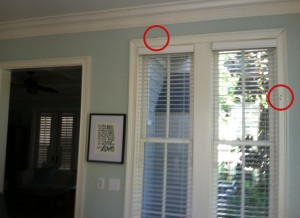 Jeremy, a highly trained sales professional in the Palmetto Exterminator Charleston office, scheduled a free inspection and quote of the home.  Given that the homeowner lived in an area of Daniel Island that has had extensive termite activity, Jeremy decided to take along with him a piece of technology called a FLIR camera. FLIR is a thermographic camera that detects infrared radiation.  Because Formosan termite colonies are larger and more dense they give off a heat signature in the wall that can be easily detected using FLIR.  To the untrained naked eye, the few dots on the trim work appears to be a minor issue.  When Jeremy applied the FLIR technology to the room he noticed several hot spots that were Formosan cartons. 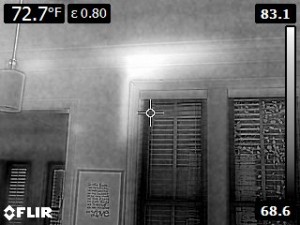 The ambient temperature in the room was about 68 degrees, while the Formosan termite cartons are around 80 degrees in the middle of the hot spots.

Another key piece of technology implemented in inspecting for Formosan termites is Termatrac. Termatrac is a radar technology that allows us to place a device against a wall and test for moisture and termite movement in a wall without having to perform any invasive task.  The information from the scanner is sent to a Bluetooth enable tablet that stores the information for future use. 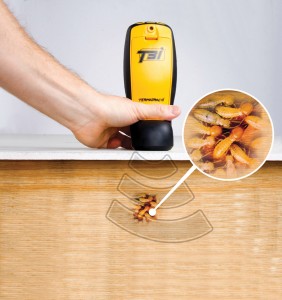 What should I do if I see Formosan swarmers or think I have Formosan activity?

If you find formosan swarmers in your home, do not panic.  However, you should immediately call a licensed and trained expert such as Palmetto Exterminators, to inspect and verify the source of the swarmers. The source is either 1) An infestation in your home or 2) Significant formosan termite activity close to your home including inside trees.

Mature Formosan Termite colonies produce swarmers that fly out of colonies by the thousands. There could be 70,000+ in any given evening flying towards lights in and around homes. Many people mistake these “hovering clouds” of swarmers for gnats or other flying insects.

An inspection and quote are free with no obligation. Simply call your local Palmetto Exterminators branch, or fill out the free inspection form on our website, and a trained professional will assist you.