Jeremy, a Charleston sales and service representative, stops a local Charleston gas station on Thursday night May 21st to purchase gas.  What he observes is not new to him.  Jeremy, who has represented Palmetto Exterminators since 2003, inspects a large Formosan Termite swarm colony being drawn to a large flood light behind the gas station.  Palmetto’s termite training kicks in and Jeremy begins to document the termite swarm with his camera phone.  At this moment Jeremy knows what the next few weeks of his life will entail, Formosan termites.

For the next two and a half weeks the Palmetto Exterminators Charleston office fields and completes inspection requests for Formosan termite swarmers from both current and non-customers.  Due to the mass volume of calls, Formosan swarm season was an all hands on deck situation.  The Operations Manager, along with several employees from our corporate office, helped lend a hand to work through the calls as soon as possible.

No one is immune from Formosan Termites

Owner Bert Snyder, also known as Bert the Bugman, received a visit from some Formosan Termites hoping to start a new colony. The swarmers were drawn to the exterior porch light that was on. Though Bert’s home is protected by Palmetto Exterminators, he isn’t immune to swarmer pests flying in from neighboring properties or his yard. Just because you see swarmers it doesn’t necessary mean the termites are living in your structure.  Historically the majority of swarm calls received originate from the exterior of the properties.  However if you observe any termite swarmers, you should immediately call a trained and license professional to inspect your property.

Formosan termite colonies have been expanding since their spread after Hurricane Hugo in 1989.  As observed over the past decade, the number of Formosan termite swarmers once again grew this year.  The growth can be contributed to the territorial expansion and maturity of colonies, a trend that will not slow down or peak in the years to come.  Formosans in a termite colony can reach into the millions, and will produce 60,000-70,000 swarmers once mature.  Given the large number of reproductive organism, the colonies have a better chance of creating a new colony than their relatives, the Eastern Subterranean termites.

In addition to infesting homes, Formosan termites have started invading live trees.  According to Palmetto Exterminators graduate entomologist Bert Snyder, live tree infestations have grown significantly this year.  In an effort to save the trees from dying, especially the mature live oak trees that make the Low Country so memorable, we have begun treating trees that have found to contain Formosan termites.  Below Tony, a Termite Supervisor in Charleston, inspects a living tree for Formosan termite activity. 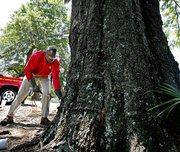 How do we fight the ever growing Formosan termite population?

Fight an adversary as formidable as the Formosan termite takes a lot of patience, knowledge, and skill.  Formosan termites will not just simply go away, and treating for the invasive species is not a one and done process.  Once a chemical such as BASF’s Termidor  has been surgically placed around the structure, the importance of a knowledgeable and thorough annual inspection process becomes key.  Each year a highly trained Palmetto Exterminators’ termite technician will thoroughly inspect your home for any signs of termite activity.  Each technician will bring skilled knowledge of what to look for, and further investigate any issue found during the process.  Even something as simple as a clogged gutter or peeling paint along a roof line can be cause for concern, and will be properly inspected in order to make sure your biggest investment is receiving proper attention.

In South Carolina, and especially the Low Country, it is not a matter of if, it is a matter of when your home will have termites.  If your home is not currently under warranty, an inspection and quote from Palmetto Exterminators is free.  Keep in mind that Formosan termites perform 75-100 million dollars worth of damage in the Low Country.  Protect your invest and call us today.

Ed has been wonderful to work with. He is very knowledgeable and a true gentleman.