In a tradition that dates back as far as the 1950’s, Memorial Day  will usher in the start of a new season for Formosan Termites Swarmers in the Low Country.  Each year thousands of future kings and queens will take flight in an attempt to start a new termite colony.  What should you do if you observe Formosan termite swarmers?   How does the Formosan termite differ from other subterranean termites found in South Carolina?  How can homeowners stop Formosan termites from destroying their house?

What Should You Do if You observe Formosan Termite Swarmers?

If you find swarmers in your home, don’t panic. Collect some of the swarmers in a bag or jar, preferably not on a piece of tape, and immediately call a licensed and trained expert with experience in handling Formosan infestations.  Although termite swarmers do not have biting or chewing mouth parts and do not cause damage, their goal is to start a new colony around your home, which could lead to an infestation and damage.  Please be patient when you call. Keep in mind that our offices are receiving hundreds of calls this time of year. Formosan termite infestations cause millions of dollars in damage and homeowners’ insurance does not cover this damage.  Don’t take the risk – call Palmetto Exterminators today. 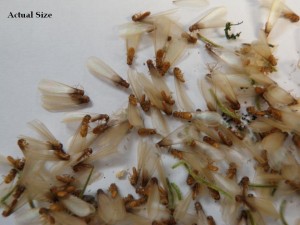 How does the Formosan Termite Differ From Subterranean Termites Found in South Carolina? 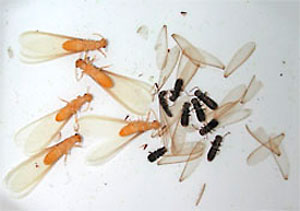 How Can Homeowners Stop Formosan Termites From Destroying Their House?

There are several key things to keep in mind in regards to Formosan Termites.  First, if you live in the Low Country of South Carolina, a termite warranty that includes Formosan coverage is crucial.  Formosan damage can be extensive and expensive.  Damages can range from several thousands of dollars to ten of thousands of dollars.  In Asia, where the Formosan termite is native, locals call the Formosan termite the “house” termite due to the devastating amount of damage that the insect can cause.

Much like the Eastern Subterranean termites, the Formosan Termites thrive in high moisture.  If you notice any peeling paint or rotten wood around your home, repair the area and have the space checked out for possible termites.  Another area of high moisture can be the roof line and gutters.  Make sure all gutters are clear and in proper working order. Aerial infestations are more common than homeowners realize and cannot be prevented with ground based treatments. These types of infestations are hard to detect and are not covered under traditional termite control contracts and warranties. 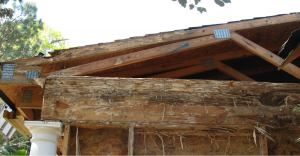 Lastly make sure a thorough termite inspection is performed on your home annually.  Trained professionals know what to look for and have tools to detect issues that you might not be aware of.

If you think you have witnessed Formosan termite swarmers, or have seen suspicious activity around your home, do not hesitate to make an appointment with the professionals at Palmetto Exterminators. Inspections are FREE and can save you thousands of dollars. 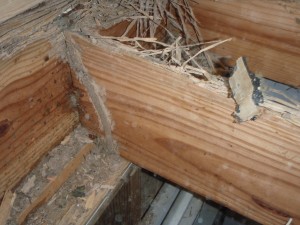 Formosan Termites had a feast on the 1st floor of this raised home in Mt. Pleasant.