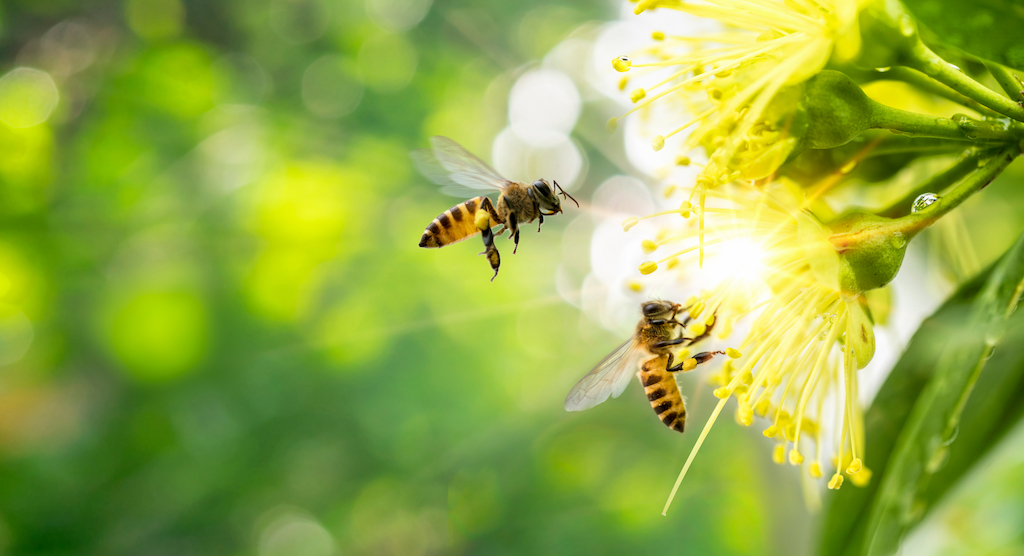 Insects and other crawling critters are already scary enough for most people, but those that can fly and sting are among the most feared. Although they are often viewed as frightening or a nuisance, they play a rather important role in the environment and agriculture. These insects are most active during the summer months and into early fall when they are foraging for food to sustain their queens through the winter months. The names bee, wasp, and hornet are often used interchangeably, but they have a few key differences between them. Here at Palmetto Exterminators, our experts have some of the answers and have broken down what makes each of these insects unique.

There are over 40,000 different species of bees in the United States alone, which can make it difficult to generalize the behaviors and characteristics of them into universal categories. Thankfully, they do share some common traits across the board that differentiate them from wasps and hornets. Despite there being thousands of bee species, there are a few that are more common than others here in the southeast and pose various levels of threat to you and your home.

Bumblebees are a common species many people often see around their backyard, garden, or home, typically spreading pollen among flowers, and living in large underground colonies. While busy pollinating and foraging, there is rarely a threat from these bees even when in close proximity to people. They are only known to attack when provoked by a person or animal, and will often go out of their way to avoid contact with people or animals. Their defining characteristics are their round, fuzzy bodies and alternating black and gold stripes.

Honey bees are much smaller than bumblebees and usually have yellow and brown or black stripes. They too live in large colonies but are more often found above ground in hollow trees or walls. Honey bees are essential pollinators for many plants and crops, and are extremely important to the agricultural industry. Additionally, they are often domesticated in commercial hives to produce honey and beeswax for human consumption. Because of their importance, honey bees should always be removed by a professional beekeeper if found in and around the home, as they are able to remove them without killing them. These bees are very social and not known to be aggressive unless provoked.  They are also the only type of bee that will die after only stinging once.

Carpenter bees resemble their bumble bee counterparts but have smooth bodies rather than fuzzy ones. The physical resemblance is where these species’ similarities end, however.  While not known for stinging or being aggressive, they build their nests inside of wood, which can be bad news for homeowners. Decaying wood is preferred over newer or newly painted, as it is softer and easier to dig into. If your home has any older wooden structures such as decks, patios, or play structures, they are at risk of being taken over by carpenter bees.

Though there are a few different species of wasps found in the United States, their behavior is more generalizable than that of the various bee species. One of the most distinct behavioral differences between bees and wasps is that rather than being pollinators, wasps eat other insects. The differences between wasps and hornets however are a little less straightforward, as all hornets are a part of the wasp family, but not all wasps are hornets.

Wasps and hornets are both also more aggressive than bees, as they can sting multiple times without dying. Below are a few of the most common wasps, which vary in appearance and threat level to you and your home.

Mud Dauber Wasps are long and slender compared to bees and usually have black and yellow stripes, with a black abdomen. They build their nests by creating small tubes of mud about an inch long and are often found on porches, sheds, attics, or any other unprotected areas of a home. They are less aggressive than other wasp species, but will sting when provoked, and are often very painful.

Despite popular belief, there is no difference between yellowjackets and wasps, as yellow jackets are a species of wasp. Yellowjackets are by far the most aggressive species of wasp and are known to swarm and attack when they feel their nests are threatened. Their nests can be found in a variety of places ranging from underground in old rodent burrows or bushes to empty wall spaces.

If you’ve ever heard the saying in math class that all squares are rectangles, but not all rectangles are squares, that’s what the relationship between wasps and hornets is like. Hornets are a part of the wasp family, but their species have a couple of distinct differences.

The most obvious difference between the two is that hornet species are noticeably larger than wasps, reaching 1-1.5 inches long with wider abdomens as well. They will also have minimal fuzz on their bodies, with black and red or black and white coloring, rather than yellow. Hornets are typically less aggressive than other wasp species like yellowjackets, but can be very territorial and will attack if they feel their nest is threatened.

Even though most of these insects are not necessarily malicious, they can be a nuisance to deal with around your home, especially with children or pets. Knowing the differences between them is the first step in determining the level of threat they pose. Keeping your house in good shape is an important aspect of pest control as well, as we’ve discussed how many of these insects will build nests in walls or other structures around your property if given the opportunity.  If trying to corral these insects on your own seems like a daunting task, Palmetto Exterminators provides professional pest control services to deal with whichever insect you may be dealing with. To keep your home pest-free year-round and stop unwanted critters before they become a problem, our quarterly pest control might be the right solution for you.

I would definitely recommend Palmetto Exterminators. They do great work at a very fair price. Brad was both professional and knowledgeable. Thank-you so much!!!