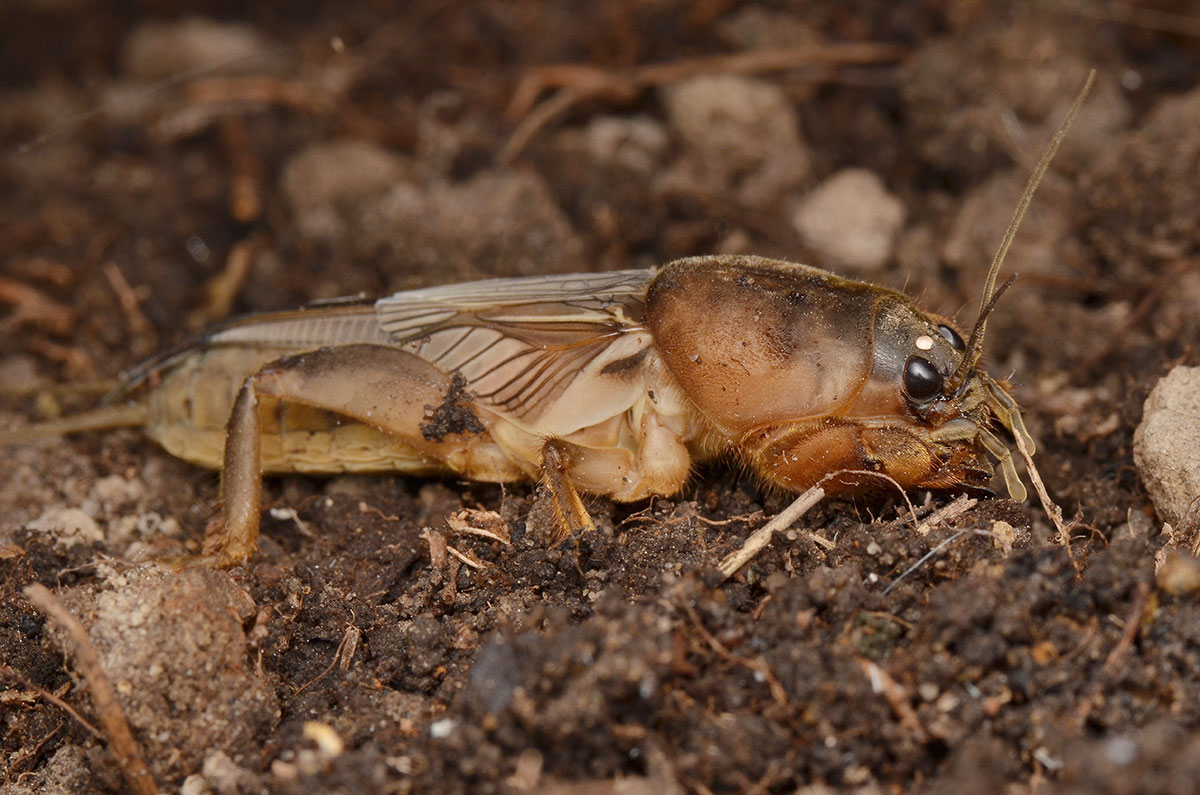 Mole crickets range in color from grayish to a dark, golden brown. They have large, dark eyes, small wings, claw-like front legs, and an approximately one-inch long body (adults); their overall frontal appearance recalls that of your typical garden mole, from which the mole cricket derives its name. In contrast to a garden mole, mole crickets have powerful hind legs well-adapted for jumping away from predators.

These insects burrow into the ground, creating tunnels at the top layer of the soil that may be visible. Their tunnels force the ground upward, increasing the evaporation of moisture, damaging roots of seedlings, and disrupting the germination process of seeds. They eat the roots of some grasses, which further damages the plant life in the area.

If you see patches of brown grass, combined with soil tunnels, you may have mole crickets on your hands. Most of the damage will occur in the summer months when grass growth peaks, but you will probably notice the damaged grasses in late summer and early fall.

The life of the mole cricket generally begins in April and May when adult females lay eggs two inches below the surface of the soil. These eggs are brownish in color and will become larger as they absorb water. At the point just before they hatch, these eggs will be about a quarter of an inch long.

Once the nymphs emerge from their eggs, they look like fully developed mole crickets, except their wings are less developed. They feed on roots and other organic material at the top of the soil, which they will continue to do in their adult stage.

Adult mole crickets have larger wings and forelegs; the males use these wings to chirp and attract mates. Males will widen the entrance to their burrows, creating a megaphone-like shape to enhance the courtship song.

Mole crickets do not pose a significant threat to humans. Though they can bite if they are provoked, they are not venomous and they do not usually bite people.

If you are experiencing pest control issues with mole crickets or other creatures, contact the pest experts at Palmetto Exterminators.

Brad is fantastic! He explained exactly what would be done for the ant treatment and scheduled me quickly. He was there when he said and then followed up to make sure everything was ok with the treatment. Excellent customer service!! Highly recommend Brad and Palmetto Exterminators!