The Carolinas are home to thirty-eight native species of snakes. Out of all of those slithering reptiles, just six species in South Carolina and five species in North Carolina are venomous. Those venomous snakes include: the Eastern coral snake, copperhead, cottonmouth/water moccasin, Eastern diamondback rattlesnake, timber/canebrake rattlesnake, and the pygmy rattlesnake.

Despite being conveyed in numerous pop culture outlets as vicious creatures warranting our disdain, snakes play a vital role in their environments and are not looking to make a tasty snack out of your ankles. Killing a snake is usually not a necessary step; more often than not, attempting to kill a snake or pick it up leads to more injuries than if it had just been left alone. Typically, the best policy is to give the snake plenty of space and let it continue on its merry way. This is particularly good advice for the following six venomous Carolinian snakes: 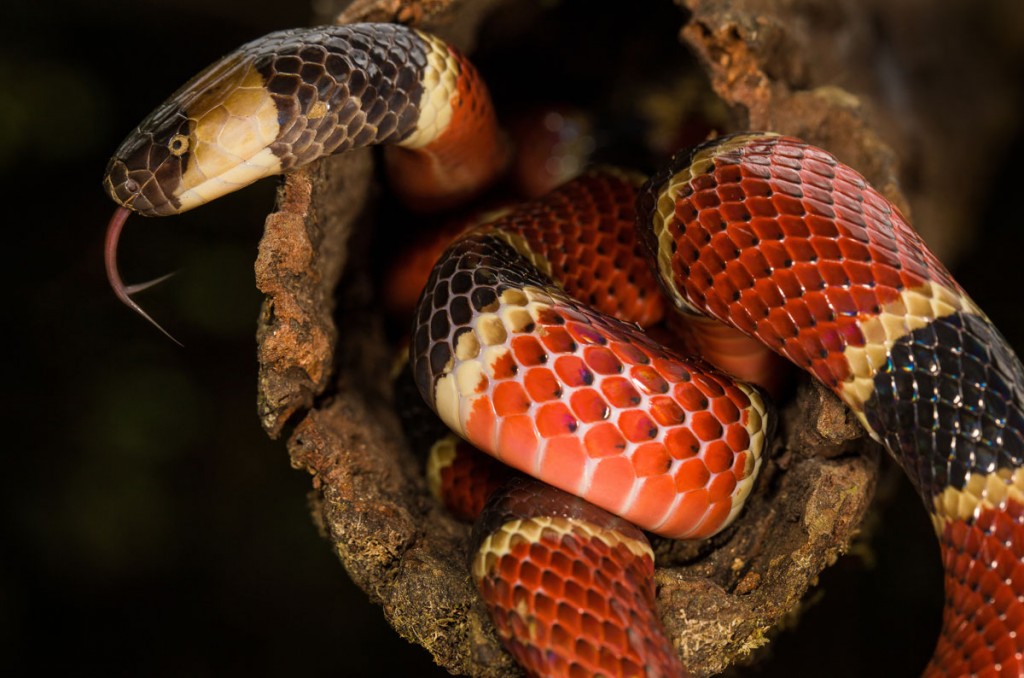 The Eastern Coral Snake is the only venomous snake found exclusively in South Carolina; all others are found in both South Carolina and North Carolina.

You may have heard the old rhyme, “red yellow, kill a fellow; red, black, okay Jack.” Coral snakes have bands of red, yellow, and black. Red bands next to yellow ones indicate the venomous coral snake; red bands next to black indicate the innocuous scarlet Kingsnake. Another way to distinguish the two is by the relative size of the black bands. The black bands of coral snakes are much larger in relation to its yellow stripes than than those of the red kingsnake.

These snakes spend most of their time underground or in leaf piles in wooded and sandy areas. Because they spend so much time underground, there may actually be more in the area than you expect.

That said, like most other snakes, the Eastern coral snake does not present much of a threat unless it is picked up. The biggest risks are amongst household animals and small children. Even so, there have been no reported deaths from coral snakes in the United States since 1967! 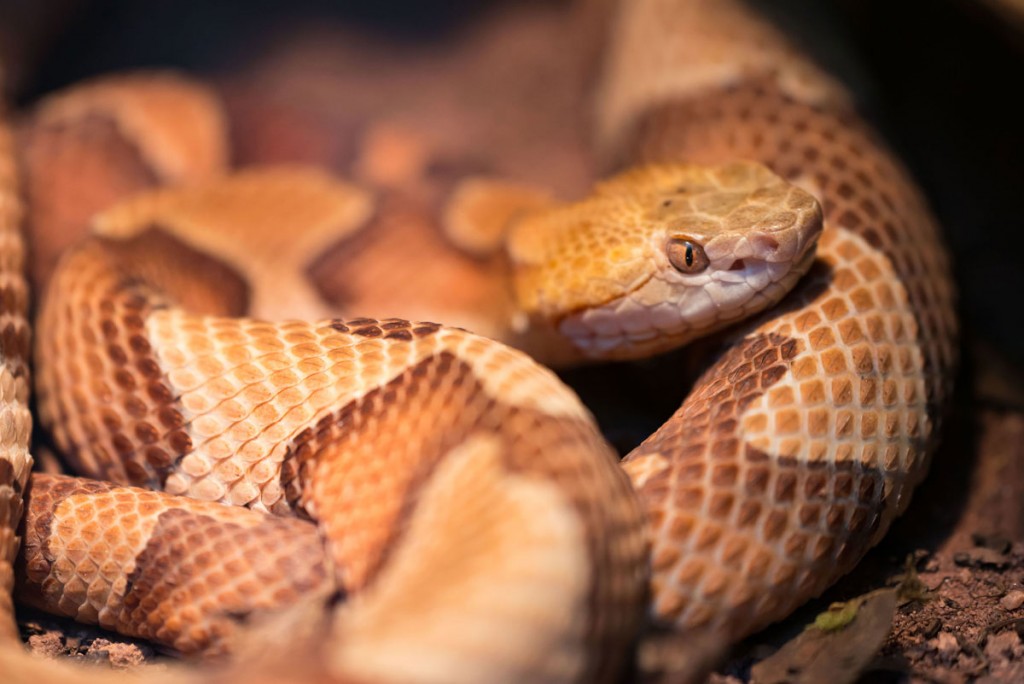 There is often much talk about the dangers of copperheads, but they are actually the least dangerous of all the snakes on our list by venom comparison. Compared to cottonmouths, their venom is half as powerful and half the volume. They are, however, much more common and are more inclined to bite than other snakes.

The Copperhead snake will show warning signs prior to attacking; when they prepare to strike, they open their mouths wide and strike at a distance. Biologists have interpreted this behavior as a warning only, and not a sincere attempt to inflict harm. 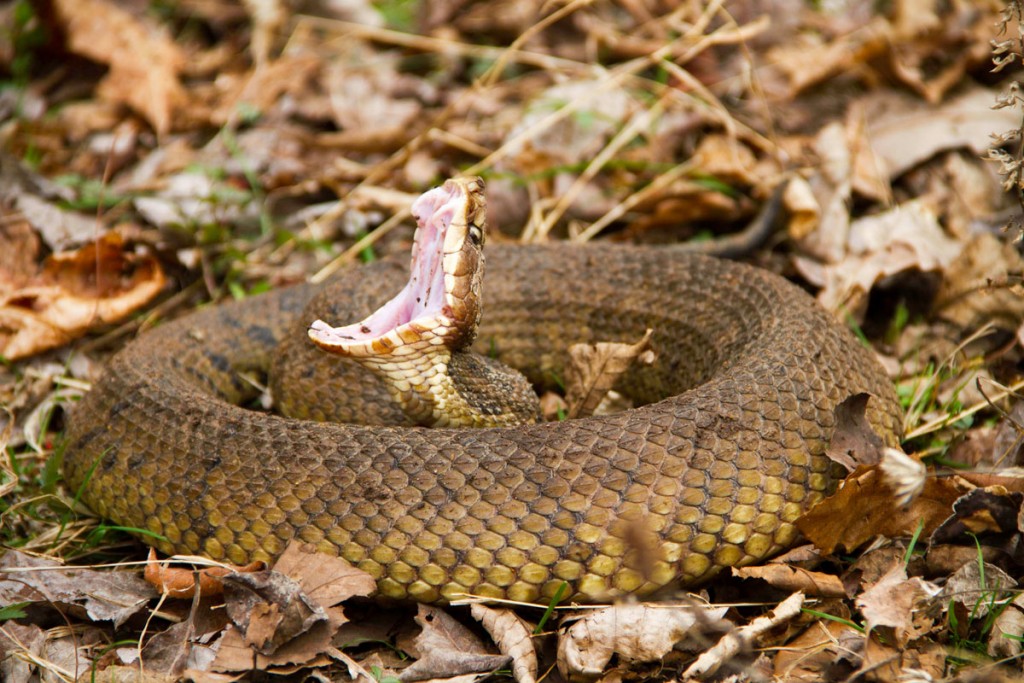 While copperheads are common in most habits in the Carolinas, cottonmouths dominate areas around the water. They are not the only commonly-found snake in water habitats though; harmless water snakes are found in this area and are often confused for their venomous counterparts. Some may even have the arrow-shaped head of the cottonmouth.

Cottonmouths can appear aggressive, but this is more of a display than a genuine threat. When they feel trapped, they open their jaws wide and expose their white mouths (hence the name Cottonmouth). They will also vibrate their tails and produce a musky smell that some people compare to cucumbers. Unlike some other species, cottonmouths will stand their ground, but biting someone is usually a last option. They much prefer to continue on their way without engaging a potential foe. 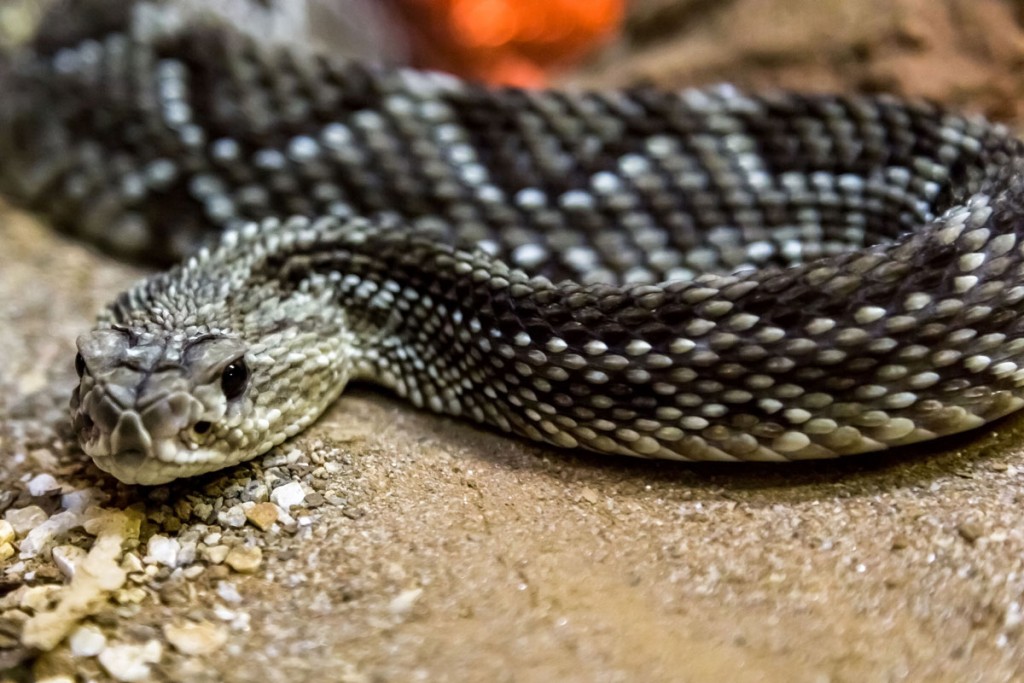 These snakes are the largest species of rattlesnake and can weigh over ten pounds! They are most commonly found in dry and sandy areas, such as dunes, but they can also be found in pine forests and even swampy terrains. Usually they steer clear of wet areas, but they do swim well. Most of their waking hours are during the day, but they are typically hiding out in brush awaiting prey. 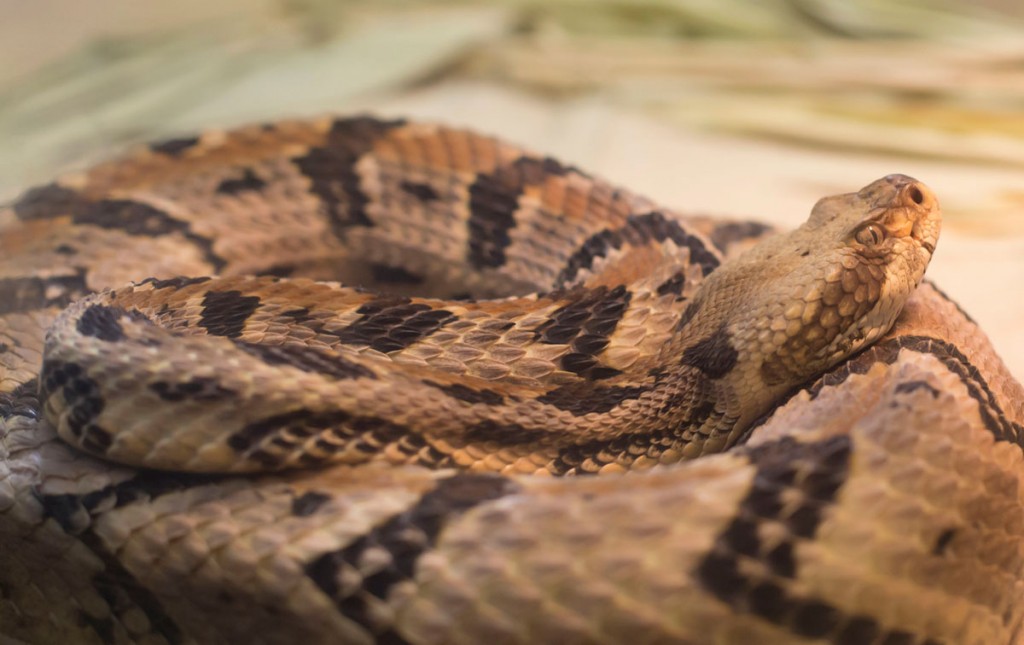 The Timber Rattlesnake, also called the Canebrake Rattlesnake, is the most common rattlesnake species and one of the largest. These snakes are durable and well-equipped for living in every type of terrain that the Carolinas offer. From swamps to pine forests and during both day and night, these gray-bodied snakes can be found moving about. They are more often seen on dry land, but they have also been known to swim across rivers.

In contrast to the last two rattlesnakes, the pygmy rattlesnake is tiny. At an average of just a foot long, its rattle often can’t even be heard! These snakes can be found in the Coastal Plain area of South and North Carolina, as well as in pine woods. They are active during the day and the night. Since they are so small, they usually try to rely on their camouflage as a defense.

Out of all the snakes in the Carolinas that you may come across, it is highly probable that it won’t be one of these fellows.

Please note that the pest professionals at Palmetto Exterminators do not directly handle snake issues; instead, we will refer you to a wildlife control specialist. Our other pest control services do help to reduce the populations of rodents and insects that snakes prey on, though, which helps minimize the appearance of snakes around your home. If you would like more information on these pest control services, contact Palmetto Exterminators.

Professional, on time and detailed reporting on termite inspection.