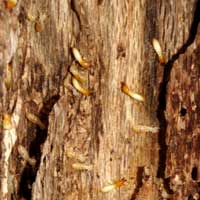 Originally native to the Far East, the Formosan Subterranean Termite was introduced to the South Carolina coastline in the late 1950’s to early 1960’s. Formosan termites are mostly subterranean termites, but differ from the Eastern Subterranean Termite in that Formosan Termites can live away from the ground given enough moisture to sustain a colony. In recent years, aerial infestation has been located as well. Typically aerial infestations are common in conditions such as clogged gutters and roof line wood decaying fungi. Formosan termite swarms, the reproductive portion of the colony, typically occur around Memorial Day weekend. During swarm season it is not uncommon to notice thousands of termite swarmers, mostly at night, in an effected area. A typical Formosan colony can produce millions of workers and vastly outnumber the native Eastern Subterranean termite. It is due to the size of the colony and more aggressive eating habits that the Formosan Termite can become a very costly pest problem in a short amount of time. Those in the South Carolina and North Carolina region should consult with a professional exterminator if you suspect formosan termites in your home.