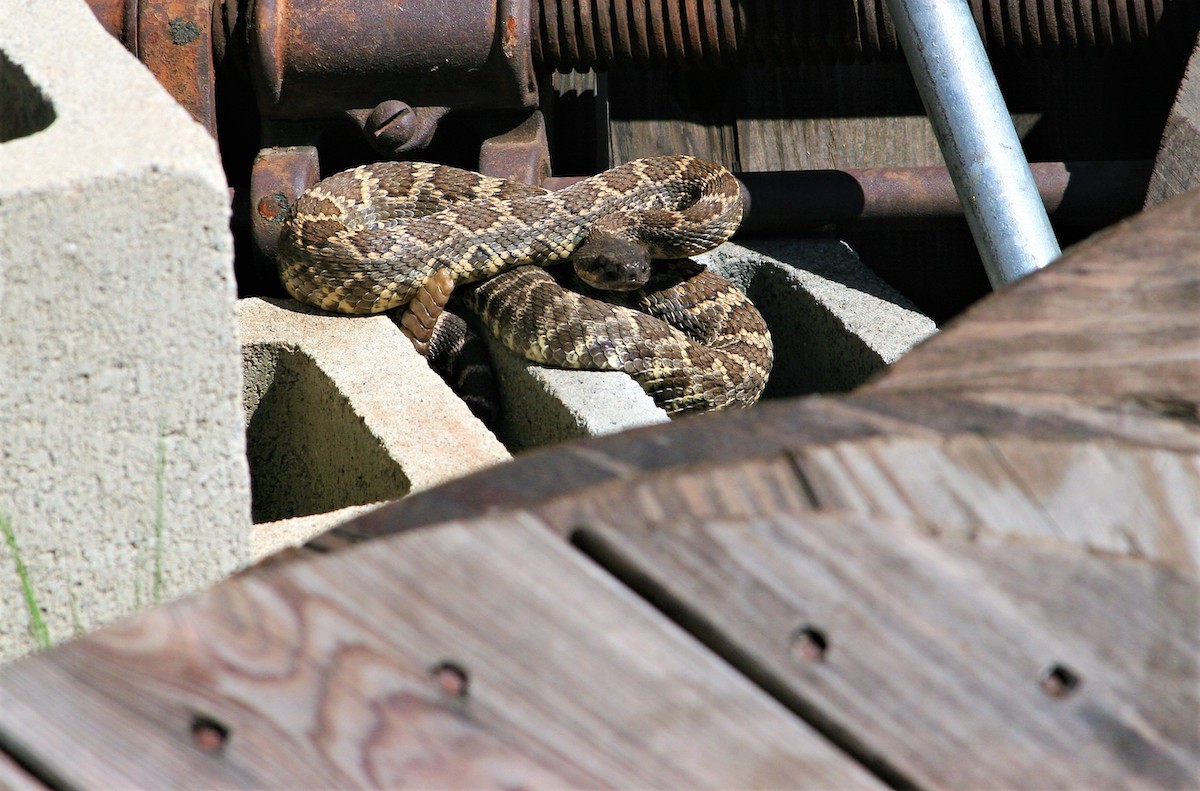 As residents of the Carolinas, most of us are familiar with the heat, moisture, and humidity that comes along with the territory. These conditions also make our region ideal for many natural critters, including snakes, as they need moisture to survive. The majority of snakes are harmless and are essential wildlife for a healthy garden ecosystem, feeding on other pests such as insects and rodents. However, some species are poisonous, and if they bite, can leave dangerous and painful injuries. Whether or not the snake is venomous, you may want it removed or relocated from your home. Here’s how we suggest handling snake encounters:

Safely Identify if the Snake is Venomous

Over 7,000 Americans suffer from poisonous snake bites every year. There are four types of poisonous snakes that you might encounter: rattlesnakes, copperheads, coral snakes, and water moccasins, which are also called cottonmouths. In South Carolina, there are 38 species of snakes, only 5 of which are venomous: the coral snake, eastern diamondback rattlesnake, timber or canebrake (piedmont-coastal) rattlesnake, pigmy rattlesnake, copperhead and cottonmouth. The mountain form of the timber rattlesnake is also considered rare in South Carolina. Here are a few general rules of thumb to help you determine whether or not a snake is venomous or non-venomous.

First, think about the behavior of the snake you spotted, and note the habitat that it’s in. Should it be poisonous, you can relay these details to a trained wildlife specialist. For example, rattlesnakes are among the most well-known snakes, and are often the easiest to identify because of their characteristic behavior. When they feel threatened, they may shake the rattles on their tails to create a loud clicking sound to warn predators away.

However, not all species of rattlesnakes actually have this feature, so it isn’t always a reliable sign. Observing nesting behaviors and environmental preferences are a good way to identify these snakes. Cottonmouths typically live in or near water. In some geographic areas, copperhead snakes live in wetland areas near forests and rivers.

Rattlesnakes, copperheads, cottonmouths, and coral snakes are all considered pit vipers, distinguished by the two holes on their snouts. These pits allow them to detect infrared radiation while hunting. Similar to a cat’s eye, poisonous snakes have thin, black, vertical pupils surrounded by a yellow-green eyeball whereas non-venomous snakes have round pupils. 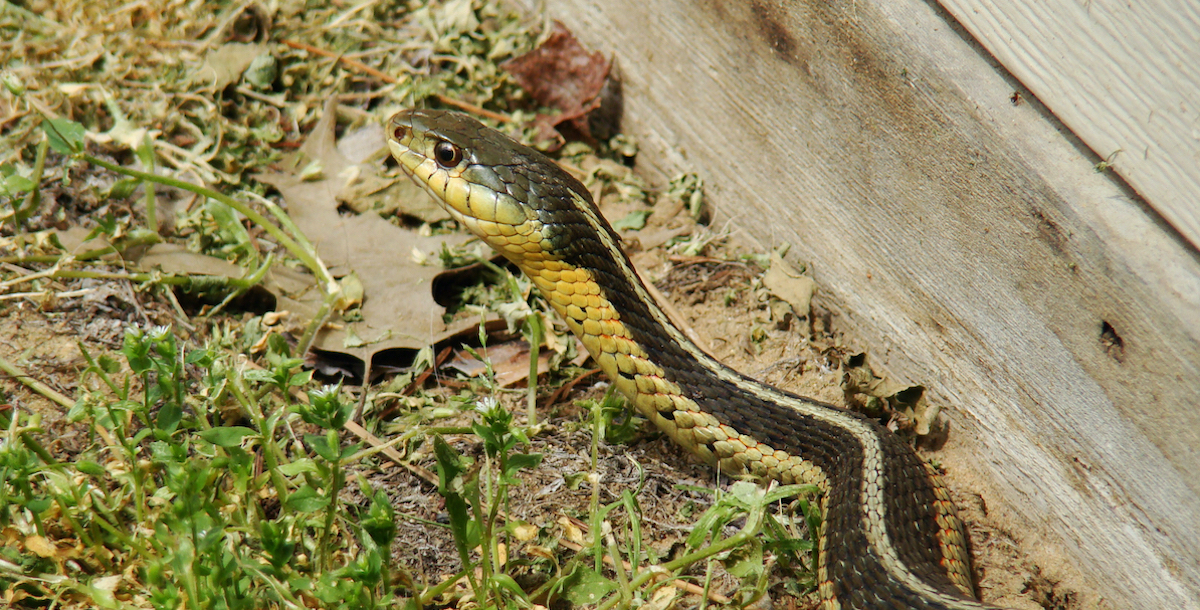 Whether poisonous or not, be wary of advice on eliminating snakes from your yard, as some of it is misinformation. The use of mothballs is often suggested, however, they are toxic and could harm young children or pets that got a hold of them. Commercial snake “repellants” are usually made with the same dangerous chemicals, and are generally ineffective in prevention. Avoid using painful glue traps for rodents and snakes, as it may catch other beneficial critters.

Deter Snakes from Your Outdoor Space

To discourage snakes from making your yard their new home, try taking these precaution:

If you enjoy getting a fresh breeze, especially during the summer, consider putting screens on your windows and always avoid leaving doors ajar. Keep brush and vegetation away from the foundation of your home. Consider placing these dense plants on the outskirts of your property, away from the home instead. If you have rats or mice in your home, work to eliminate them as they can be viewed as a food source by snakes.

How to Get Rid of Snakes in the Yard

So, what should you do if you find a snake in your home or yard? Encounters with venomous snakes in backyards are rare, but should you encounter one, don’t try to move it or kill it yourself. Call a professional wildlife removal company that specializes in handling venomous snakes, or you can choose to let it be, as long as children and pets aren’t present. Educate you and your family about what snakes are venomous in your area , so you know which snakes are actually dangerous, and which are harmless. Since it may be difficult to identify whether a snake is poisonous or not from a safe distance, consider contacting a local wildlife control specialist to relocate the snake for you.

You should never deliberately approach a snake, poisonous or not, or try to touch or handle it. Most bites are a result of individuals attempting to handle or kill the snake, so avoiding this will eliminate any unnecessary chance of being bitten. Even if the snake appears dead, avoid handling it, as you may still be at risk. Make sure to teach young children this tip, as well! If you happen to be bitten by a snake, seek medical attention immediately.

Handling Snakes Inside Your Home

The best thing to do in a home snake encounter is to safely encourage the snake to go back outside. Make sure to take any children or pets outside of the home while trying to do so. If possible, carefully open a nearby door for the snake to exit. Never try to approach, touch, or handle the snake yourself, as you or a family member could be bitten. If the snake cannot be herded outside, try trapping it under a basket, box, or another object at a safe distance. Keep the object over the snake in place until a professional can arrive and assess the situation. When relocating a snake poses a challenge, confine it to a room or corner using barriers.

Please note that the pest professionals at Palmetto Exterminators do not directly handle snake issues; instead, we will refer you to a wildlife control specialist. Our other pest control services do help to reduce the populations of rodents and insects that snakes prey on, though, which helps minimize the appearance of snakes around your home. If you would like more information on these pest control services, contact Palmetto Exterminators.

Excessive rain brought in hordes of roaches...uh, palmetto bugs. After treatment, said hordes are graciously dying. Tech told me they would return for a booster treatment if necessary. Staff very responsive.