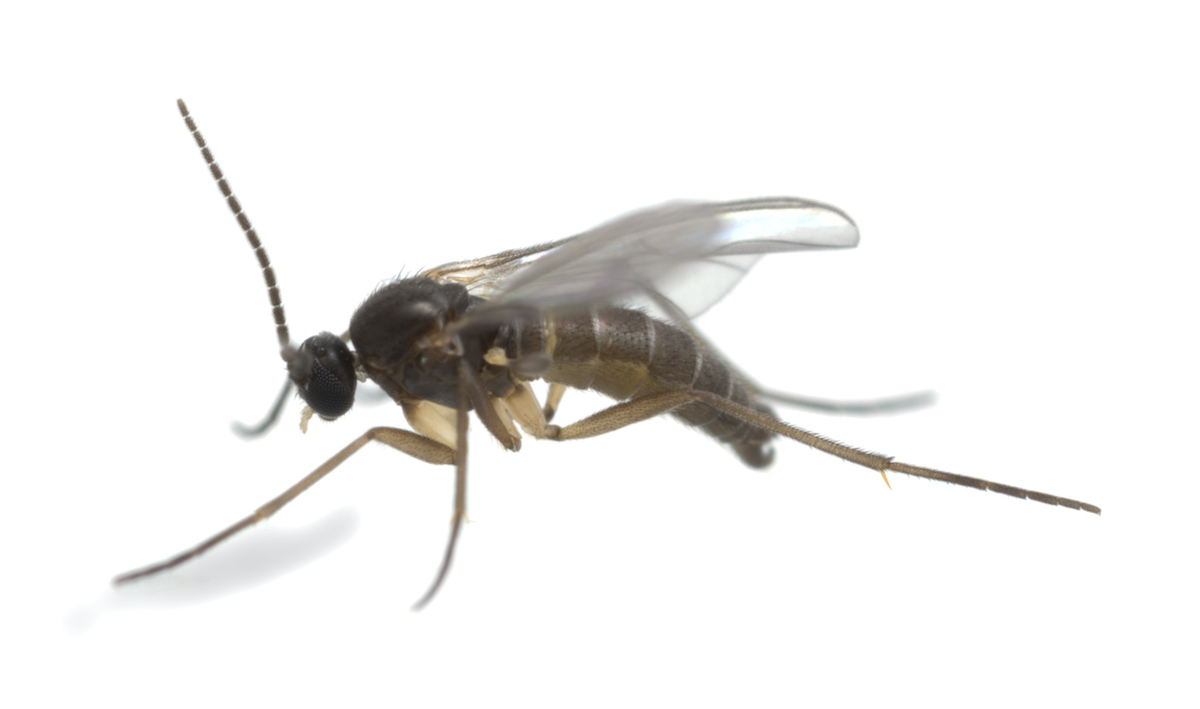 Fungus gnats are dark, winged insects that are similar in appearance to mosquitoes, however, they are much smaller in size. They typically only grow to be 2 to 8 millimeters in length, with dark gray or black bodies, long legs, and long antennae. They can be identified by the distinctive y-shaped pattern they have on their wings. Difficulties identifying these pests can be resolved with a pest inspection by a trained exterminator.

Life Cycle of a Fungus Gnat

The fungus gnats develop through four life stages: egg, larvae, pupa, and adult. The lifespan of a fungus gnat largely depends on temperature, but typically live 4-6 weeks from the time they hatch as an egg, only spending 3-10 days in the adult stage of life. The fungus gnat eggs are planted in damp, dark areas of organic debris.

Once hatched, the larvae feed on fungi in the soil, aiding in decomposition. If the fungi in soil should run out, the larvae will begin to feed on plant roots, stunting the plant’s growth and causing leaves to die and fall off. Fungus gnats are known to be weak fliers and are able to move swiftly walking across surfaces. A gnat is able to enter a home and develop through the entirety of its life cycle indoors. If these gnats become a nuisance in your home, an exterminator can develop a plan to neutralize the infestation.

Potential damage to household gardens is usually regulated by natural predators and weather changes and is typically not severe. However, these gnats are known to damage commercial crops and have been credited for carrying a number of plant pathogens. If you suspect your commercial crops have been infested with fungus gnats, it is recommended to consult a commercial pest control expert, to prevent further damage. While adult fungus gnats consume only nectar and water, they can still transmit pathogens as they land on plants.

Fungus gnats are primarily a nuisance pest, as they cause little to no property damage and actually aid in the decomposition of organic matter. They do not bite animals or humans and are not known to carry any human pathogens. However, they are known to travel in large quantities and can be disturbing as they swarm around people.

How to Get Rid of Fungus Gnats

If you know you have a fungus gnat problem, be sure not to bring infested plants and pots indoors. Since larvae and eggs thrive in a moist environment, to control further hatching and development, allow plants to dry out as much as possible in between waterings. Create well-ventilated floors and spaces in your greenhouse.

Clean up dead plants and other decomposing organic materials, as these will provide an ideal environment for further development. Sprays containing pyrethrins can be used to control the pests and should be used daily for 2 weeks to reduce the population and control the adults, who will emerge almost daily. As long as they aren’t causing damage to your home or garden, fungus gnats can be left alone with the weather and natural seasonal changes resolving the problem over time.

If fungus gnats are a bothersome pest in your home, contact our skilled pest control experts at Palmetto Exterminators to learn more information or receive your pest inspection.