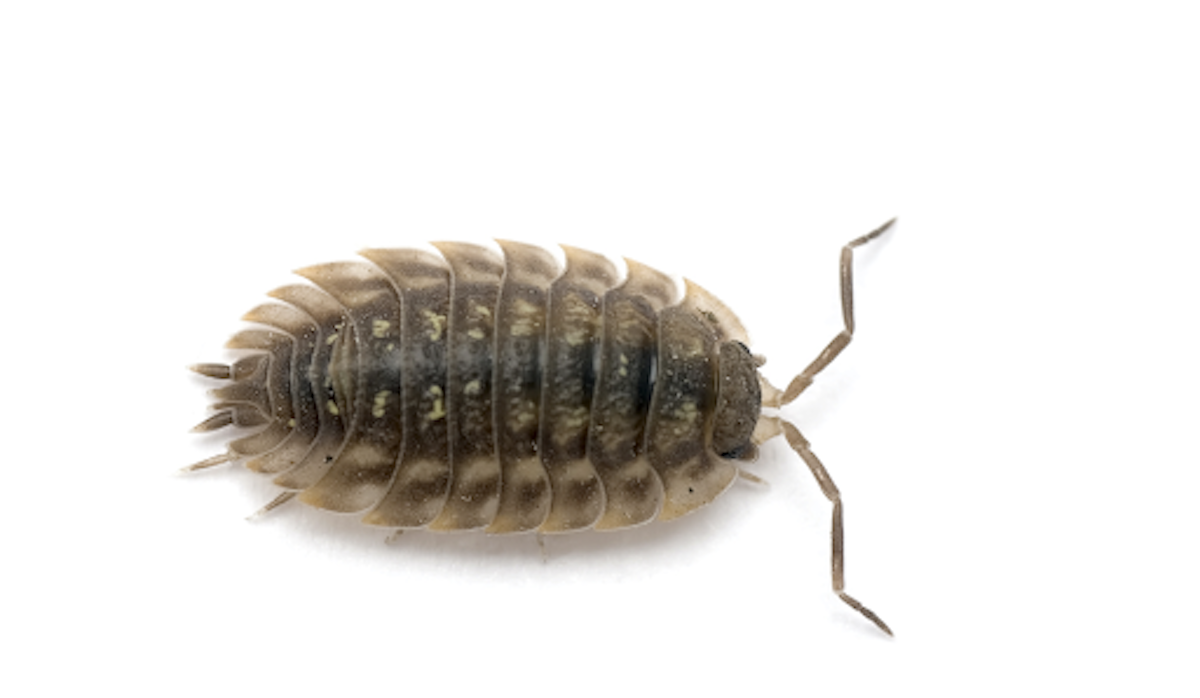 Often confused with pillbugs (a.k.a. roly-polies), sowbugs are actually land-living crustaceans. They are the only crustaceans that have adapted to living exclusively on land. Unlike pillbugs, sowbugs cannot crawl into a ball when they feel threatened nor can they fly or sting because of their posterior appendages. Instead, they rely on their hard exoskeleton to protect themselves from predators. They are typically ¼ inch to ½ inch in size and can range from slate gray to dark brown. They have seven pairs of legs, two tail-like appendages, and two pairs of antennae, however, only one set is visible.

Female sowbugs, unlike other insects, carry their eggs in a pouch underneath their body, where they remain for up to two months after hatching. Sowbugs go through three key developmental stages, from egg to nymph to adulthood. This lifecycle is known as simple metamorphosis. The young sowbugs do not leave their mother’s pouch until they are nymphs. Development to adulthood typically occurs over a year, and sowbugs typically breed in the spring season. Most insects are seasonal and live less than a year. In comparison, the sowbug has a relatively long lifespan of up to three years. However, they certainly have nothing on the wood beetle, who can live up to 40 years! Female sowbugs may produce up to 3 broods, about 50 sowbugs each, annually.

Where Are Sowbugs Found?

Sowbugs, similar to pillbugs, are foraging pests that mainly feed on decaying organic matter, hence the nickname woodlouse. They typically are found in moist, outdoor environments, though they do occasionally end up inside homes and other buildings. However, mulch, leaves, garden produce, and other plants may attract sowbugs into your home and yard. Oftentimes, these pests will enter homes through ground-level doors and windows. These pests may also make their way into garages or damp basements through structural cracks in homes. Since many areas in a home are too dry, the pests usually die after they come indoors, so signs of sowbugs in your home may be indicative of excessive moisture in the home through a like or wet wood.

How Do I Get Rid of Sowbugs?

Although they sometimes enter buildings in large numbers, sowbugs don’t cause any hare, though they can cause minute damage to your garden. They don’t sting, bite, carry or transmit diseases, nor do they touch food, clothing, or wood, Still, no one wants unwelcome bugs in their home. To prevent sowbugs from coming inside, make sure to eliminate decaying plants and debris from around your home. Minimize interior moisture and humidity and seal off any entry points, cracks, unsealed windows, or doors.

I have been very happy with my service. I really appreciate Carson, our serviceman. He is very friendly & always accommodating to where I want him to spray. He seems knowledgeable about his job. He is always on time as well. Thank you Carson & Palmetto! Great job!!!